The Conservation of the Gen. John Winslow Portrait

Posted on October 22, 2014 by directorpilgrimhallmuseum

The portrait was donated in 1883 by Abby Frothingham Gay Winslow. Her donation was one of the most important gifts in the Museum’s history. It included most of the Winslow family portraits, Edward, Josiah and Penelope, Elizabeth Paddy Wensley, Gen. John Winslow and furniture pieces. The portrait of Gen. John Winslow was accompanied by his formal silver short sword and complements several Winslow letters and documents in the Museum’s Archives. The portrait was displayed at the Massachusetts Historical Society in Boston with the other Winslow pieces from the 1840s until they were transferred to Pilgrim Hall Museum.

The current restoration of the Winslow portrait offers an opportunity to reconsider this remarkable work of art and its significance for colonial history.

Winslow built the house still standing on the corner of North and Main Streets in Downtown Plymouth’s Shirley Square in 1726. The gambrel-roofed building is an early example of the Georgian style of architecture that dominated the rest of the 18th century. This house was sold in 1757 to Winslow’s nephew, James Warren, Jr. (Winslow’s sister Penelope Winslow married James Warren, Sr.), who owned the house with his wife Mercy Otis Warren until their own deaths in the early 19th century. John Winslow’s brother Edward built the Mayflower Society House in 1754 at the other end of North Street.

John Winslow served in the British military, rising through the ranks during the 1740s and 1750s to become a Major- General in 1756. John’s older brother Josiah (1701-1724) was killed in action in St. George, Maine, during Governor Dummer’s War. Winslow commanded English forces in an expedition to Cuba in 1740-1741, participated in the Siege of Louisbourg, Nova Scotia, in 1745, lead an expedition against the French in Maine in 1754, was sent by Gov. William Shirley to command during the Acadian expulsion of 1755, and was placed in command at Fort William Henry in upstate New York for most of 1756.

Winslow lived at Marshfield after retiring from active service, selling his home to his youngest child, Dr. Isaac Winslow (1739-1819) and moving to Hingham, Massachusetts. Gen. Winslow, like many other wealthy leading families of Colonial Massachusetts owned black slaves, one of whom, Briton Hammon, published A narrative of the uncommon sufferings, and surprizing deliverance of Briton Hammon, a negro man… servant to General Winslow, of Marshfield, in New-England; who returned to Boston, after having been absent almost thirteen years…. And the remarkable Manner in which he met with his good old Master in London; who returned to New-England, a Passenger, in the same Ship.

Winslow and his family had strong Tory leanings in the decades before the Revolution. His oldest son Josiah died in infancy and his middle son, Pelham Winslow (1737-1783) died in loyalist exile in New York, while Isaac kept his loyalist politics quiet and was not bothered because of his service as a physician inoculating the town.

Mary, John Winslow’s wife, died in 1772 after forty seven years of marriage. He remarried the widow Bethiah Barker Johnston who died in 1790. Gen. John Winslow died on April 17, 1774, in Hingham at the age of seventy-one.

The English artist Joseph Blackburn (fl.1750-1765) was the leading painter in Boston during the late 1750s and early 1760s. The city’s earlier painters were no longer active when he arrived. John Smibert had died in 1751, Robert Feke stopped painting by 1751, and John Greenwood left New England in 1752. Blackburn is first recorded as working in Bermuda 1752 to 1754, then in Newport, Rhode Island, in 1754, and finally beginning practice in Boston by 1755, finding occasional work around Portsmouth, New Hampshire.

Blackburn’s paintings introduced a flowing and colorful idiom to the provincial art scene. In particular, Blackburn’s skill at painting textiles and their patterns was a hallmark of his work, especially in the lace and patterns found on clothing in his portraits. Blackburn’s Boston career involved painting the portraits of political leaders like James Otis (1755, private collection), military leaders like Sir Jeffrey Amherst (1758, Mead Art Museum, Amherst College), and wealthy families like the Olivers, Bowdoins, Bulfinches, and Apthorps, exemplified by the portrait of Mrs. Thomas Bulfinch (Susan Apthorp, 1757, MFA Boston).

Blackburn was also patronized by the Boston branch of the Winslows, descendants of Fortune passenger John Winslow and Mayflower passenger Mary Chilton. Isaac Winslow (1709- 1777, great-grandson of John and Mary Winslow and Gen. John’s third cousin) is found in three paintings throughout his life. He was painted first by Robert Feke in 1748 (MFA, Boston) and the third time by John Singleton Copley with his second wife in 1773, but the second painting of Isaac Winslow was done by Joseph Blackburn as his most ambitious work.

Isaac Winslow and His Family (1755, MFA, Boston) is a Rococo family portrait of Isaac, his wife Lucy Waldo Winslow, and their daughters Hannah and Lucy with an idealized background. The shimmer of the flowing silk dresses and the rich colors of pink, blue and brown combined with the graceful poses and gestures portray a this provincial domestic family in the current English style. Blackburn’s style, technique and skill was soon surpassed by his apprentice John Singleton Copley who would rise to become the most important American painter of the Colonial Period. 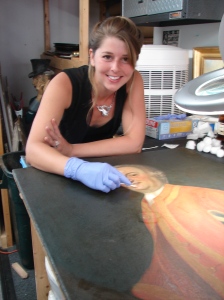 Blackburn’s Gen. John Winslow portrait shows him in the red military uniform of a British officer. It shows a man in a white wig in a red uniform coat with gold trim and white cravat and holding a black hat with gold trim under his left arm. The face is plump with a double chin and pink cheeks and nose. Dark, painted spandrels cover the lower corners of the painting’s canvas with the artist’s signature of “J. Blackburn 1756” in the lower left spandrel.

Heavy over-painting and years of dirt and grime hide many of the details which will hopefully be restored during the conservation. Early evidence from the cleaning shows that Blackburn painted a detailed lace border which is obscured by the later gold over painting. When the conservation is finished, Winslow’s coat will be the rich red color. Gen. Winslow’s pose and the portrait’s overall composition is similar to the Blackburn portrait of Joshua Winslow (1695- 1769, Yale Art Galley), who was Gen. John’s third cousin and older brother of Isaac Winslow discussed earlier.

The restoration of the Gen. John Winslow portrait will be completed in the Fall of 2014, when the painting will return to Pilgrim Hall Museum and be put on display.